Now that we have a child, packing for any kind of overnight trip requires checklists upon checklists: what it will take to keep her happy in the car, to help her sleep in a new place, to increase the odds that she'll eat, a separate bag of games and toys to keep her busy in the car, dvds, snacks, clothing for various climates, diapers, wipes, Kiku the monkey, pacifiers, little spoons for little hands, a bag of basic medical stuff ... you get the picture. And then we have to pack for us. It's quite a production.

The hardest part of leaving for a trip with a toddler is that moment when my hand is suspended next to the ignition, ready to start the car. Are we really ready? To we have everything we need? Is the phone charged? The tank full? Did you check her diaper? Are all of the pieces in place? Can we safely commit to leaving our home and venturing to wherever it is we're going? Because there comes a point in the drive when you can't turn back - and there are some things that can't be bought along the way in the event they're left behind.

This was my life two days ago as we prepared ourselves for the +300 mile trip to my inlaws' house, where we're spending the holidays. I literally taped the last to-do list on the back door so I wouldn't leave anything behind in the blurry-eyed state of our 0-dark-30 departure. I had that moment, toddler crying in the car-seat, husband popping the top of a rockstar energy drink and loading a Dora DVD into the laptop, where my hand would not budge towards the ignition. I'm leaving something. All the pieces are not in place. They can't be in place. We're forgetting something. I just know it. And then it hit me: I'm doing the same thing with my sequel.

Tanzy and her sidekicks have been inching towards the climax of the sequel for weeks. It's a big moment for all of them, and nothing will be the same once the dust settles. It's a scary moment for me as a writer, echoing the same kinds of questions in my head: are we ready? Am I forgetting something? Are all of the pieces in place. Are we SURE we're ready for this? Because there comes a point when you can't turn back... and there are some things that can't hop on the train once it's in motion.

Yes, it's a draft, of course it can be changed. Likely, it WILL change 100 times between now and the final draft. But this first draft blazes the trail. Even if I rewrite the whole story from the ground up, this first pass will color any new versions that come after it. Its smoke will linger in the proverbial air. Drafting the climax will force me to commit to how I see this whole thing shaking out. And it's making me seek and destroy any loopholes and inconsistencies in the plot preceding this epic moment.

But the time has come. The lists are checked off. The car is packed. The tank is full. Take a deep breath. Turn the key. Here we go...

p.s. Part of our traditions include setting goals for 2013, so be on the look out for that post in early January, and start thinking about your own. No matter how old I get, the new year always reminds me of a blank sheet of paper. So very, very inspirational. Have a fantastic holiday season!
Posted by Unknown at 2:58 PM 2 comments:

The high school riding team I coach competed in another show this weekend. Before the competition starts, we do what's called a "course walk." Coaches lead their riders around the jumping arena, describing the best path from one jump to the next. Where to stay straight, where to hug the rail, when to move up, when to wait, etc. In short, it helps them see the big picture, and to have a game plan once they get in there.

I had two of my girls with me on one particular course walk. From the middle of the ring, they concluded that they were interested in taking a more "direct" route from jump five to jump six. The path they wanted involved making a sharper turn, but they believed it would give them a straighter path to jump number six. I disagreed, but I kept my mouth shut, and instead told them to walk it and see what they thought. It only took them half the distance to the jump to realize that the direct path wasn't straight at all, and would set them up for a really awkward turn on the other side to get to jump number seven.

I could tell that they were disappointed that they'd even suggested the route, but I told them I was glad they did, and glad that we decided to see what would happen should they have taken the direct approach. I wanted them to see for themselves why the route wouldn't work. If I simply told them no, they always would've wondered how that path would've ridden. Now they had a better feel for the whole ring. More importantly, they didn't just know which path to take, they also understood why.

As I explained this to them, it hit me how this same principal can apply to my main character and the course she's walking. It's made me brave enough to send her down paths I know will lead to a dead end, because I learn more about her each time she makes a decision, even if I disagree with her. Especially if I disagree with her. When we explore these alternate routes together, more pieces of the big picture and plot line fall into place. Even better: I understand what aspects of the plot are most important and why.


p.s. A huge congratulations to my team - we won high point champion team of the day, and qualified five riders for Region championships. 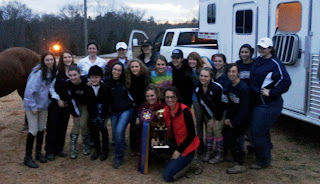 NaNoWriMo - or, National Novel Writing Month - is made for people like me. I obsess, pull all-nighters, shun household duties, etc., and that's during the other eleven months of the year.

Want to know how many days it took me to reach that magical 50K word deadline? I'll have to let you know, because right now I'm sitting at a cool 41,010.

So what happened? A freaking miracle. At last, this single-focused, neurotic person that I am learned how to find balance between my two jobs, my family, and my writing. During NaNo. Go figure.

With two days left, I had 10,000 words to go. The old me resurfaced for a moment, itching to type the nights away in the quiet of a sleeping house. But there was a problem: one of my riding teams had a show on December 1st. That means an EARLY morning and a long day, and, more importantly, kids that really need me. All of me. A bright, alert, focused me. Not a me that hadn't slept in 48 hours. So, for the first time in a very long time, I counted the costs, weighed my options, and my writing lost. I didn't try to squeeze it in. I didn't go for the compromise. I let the other parts of my life come in first, and, more importantly, I didn't get my panties in a bunch about it. I made a choice, and I was happy with it.

I'd love to tell you that we had a spectacular show. That every kid came in first and we rode into the sunset like champions. Unfortunately, it was not our day. Not at all. It was the kind of day that was almost too much to handle, and that was a fully charged, well rested me. I can't imagine that I would've been able to be the coach they needed on a day like yesterday had I burned the midnight oil in the days prior to the show.

I think NaNo is a tool to help writers make their writing a priority in their lives. Funny that NaNo is what it took to make me learn the exact opposite: writing IS a priority, but not at the sake of people who count on me. Of course, I've always been a little contrary.

Yes, I still daydreamed about my plot and my characters about as often as most guys think about, well, you know. So I took notes. Texted myself in the grocery store. Jotted an idea down with a crayon as my daughter and I were coloring in front of the TV. Wrote a bit of dialogue on the show program yesterday. And then, I set them aside - both physically and mentally - until a better opportunity to obsess about them came along.

Thirty days. Forty-thousand words. And finally, the ability to multi-task. I lost. I won. I wouldn't change a thing.
Posted by Unknown at 5:12 PM 3 comments: