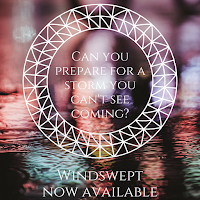 Windswept is HERE y'all! And with it comes a category 5 giveaway. Don't you just love a good storm?

How do you enter? Why, spread the word about Windswept, of course! Use the Rafflecopter form below to submit your entries. The giveaway opens Tuesday, May 22nd, and ends Saturday, May 26th at the stroke of midnight. Five winners - one prize per winner - will be selected at random by Rafflecopter within 48 hours of closing, and will be contacted directly from me (jadiejoneswrites@gmail.com) by email.

Windswept is on sale NOW for just $1.99 on Amazon for Kindle. If you haven't read Wildwood yet, you're in luck, because it's also on sale for just $2.99.

Check out an excerpt from Windswept:

“Our enemies are close," Maris whispers, her gaze shifting from me to Jayce and back again. "Too close. If we all join hands, I will be able to seal our sounds inside so we can speak freely.”
“How do I know you’re not an enemy, too?”
“You don’t.” She flexes her fingers, but waits for me to decide to make contact.
“For Pete’s sake, Tanzy. This isn’t The Bachelorette Candidates’ special edition. You’re not getting married. You’re just casting a damn spell.” Jayce grabs my arm with one hand and Maris’s arm with the other, and joins us together. “There. Hashtag let’s-do-this-already,” she says, clamping her palms in ours to complete the circle.
Maris suppresses a smile and closes her eyes. I deny a shudder of nervousness and force out a long, slow exhale.
“Air and water join us here, use our light, and make a sphere. Seven colors round and round, shield our circle, hide our sounds,” Maris commands. She repeats the incantation two more times. The air warms and thickens. A growing charge pulses through my arms like an electric current.
Maris falls silent. Everything does. The mist continues to drizzle, blanketing the muddy earth and barren trees, but the steady hiss has vanished. Even though we sit within a few steps from the creek, I can’t hear it. With a start, I realize it must work both ways. No sounds in. No sounds out.
“We are safe to speak, but it won’t last long.” Maris slips her hand from mine. Her charcoal skin is pale in places where I’d unwittingly tightened my grip. Will I ever learn how to use the horse’s strength deliberately?
I rub my clammy, filthy hands together, trying to make them warm enough to stop shaking. They’re sweaty with nervousness, and the rust-colored film on my hands rolls into beads. It’s not gritty like the dirt I clung to when I climbed out of the ravine at Wildwood. It’s smooth, and presses flat into tiny flakes wherever I push down.
This is not earth.
This is dried blood.
David Andrews’s blood, caked in the webbing between my fingers and crusted beneath my nails.
The sound of his last, sputtering breath echoes in my brain. I let out a cry and wipe my fingers violently against my dress. Copper streaks the wrinkled white linen within seconds. The color leaves my hands, but there’s no relief from its weight, its smell.
“What’s wrong?” Jayce’s voice is an octave too high. “Is that blood?” She sniffs at the air. Her pupils dilate as she arrives at her own conclusion.
I can’t summon the focus to answer—can’t stop trying to make my hands clean. From the expression on Maris’s face, she’s seeing the memory of me strangling Vanessa’s husband. The image of life leaving his eyes. The nightmare I can’t wake from.
Her gaze trains on Asher’s mark, and she brings an open palm to the brand. Heat crawls across my chest, but I’m frozen in place. My arms don’t heed the mental command to bat her hand away. Two of the circles turn black, shimmering like the coming night, and then fade back into the appearance of an old scar.
“When did this happen?” She regards me with new distance, studying my face like I’m a complete stranger.
“Vanessa tricked me into believing her husband was attacking her. She told me he would kill her. She set me up. She made me believe . . . I thought he was Asher.” The confession tumbles from me, heavy and slipping.
“You’ve killed someone?” Jayce asks, her throat constricting around the words.
“She has taken two lives. Two of these rings belong to her now,” Maris says. Her fingers curl. She stares past me. I risk a glimpse of Jayce, whose face falls from brazen to defeat within a single second.
“Tell me about the first,” Maris orders, her mouth forming a grim line.
“An Unseen attacked Vanessa in the woods. I got between them. He picked me up by my throat and I . . . exploded,” I whisper. “I didn’t want to kill him, but he kept coming.” The memory plays in front of my open eyes. “If I hadn’t killed him he would’ve killed me.”
“Doesn’t matter. She’s useless.” Jayce shakes her head and mutters under her breath.
“I’m not useless.” My fingernails dig into my palms.
“Yes. You are,” Jayce growls.
“Enough,” Maris says. “This is Hope’s fault. She chose to keep Tanzy in the dark, and this is the price. Tanzy, you can’t kill anyone else, Seen or Unseen, for any reason.”
“A third kill, and you belong to Asher,” Jayce adds, focusing her icy glare on my face.
All the air is sucked from my lungs. I was under the impression the three circles had everything to do with Spera. How could I have missed this? A mental path quickly links the two lives I took, and arrives at one common denominator: Vanessa. She’s masterminded every move I’ve made since waking with the horse’s Vires blood coursing through my veins. She must know what will happen if I take a third life.
It’s an insurance policy, I realize. If I won’t use the Vires strength for Asher, I can’t use it at all. 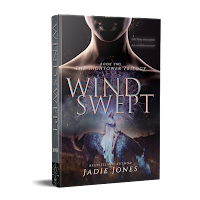 Want another taste test? Check out snippets, features, reviews, and more on my Instagram page.

Thank you so much for celebrating Windswept's release week with me! If you win the gift card, what will you splurge on? Comment below! 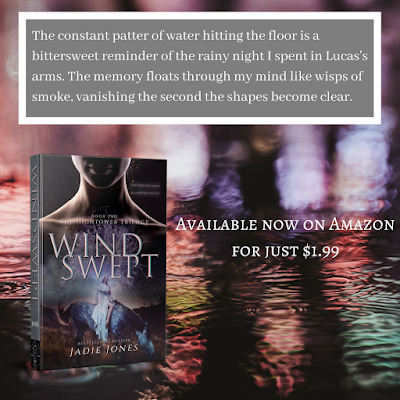 Tanzy's journey continues in Windswept, Book #2 in the Hightower Trilogy.

An Unseen World believes Tanzy Hightower is the key in an ancient prophecy meant to deliver the only new birth in all of time. They have waited a thousand years for her soul to return to life in human form. Some of them will stop at nothing to fulfill the prophecy, and others have sworn an oath to end Tanzy’s existence, permanently.
Tanzy’s body is compromised. Her veins are now home to the blood of a savage, wild horse, and its instincts are becoming impossible to control. Her world is also divided. She is determined to rescue Lucas, an Unseen creature who has loved her since her first life, and to find her treasured Harbor and the other stolen horses, which are bound for a catastrophic end in a world she can’t access on her own. Yet the only allies she has left insist she seeks refuge in a remote safe house on the Outer Banks.
While her fellow candidates beg her to stay in hiding, new enemies work to draw her out, making it clear Lucas and the horses are hers for the taking. But Tanzy knows all to well that when your loved ones are used as bait, finding them is only the beginning.